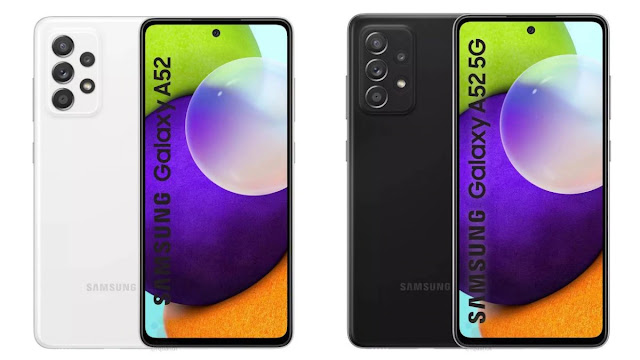 The expected Samsung Galaxy A52 is  to make its debut in India sooner than we expected. So far ahead of the official launch, a lot has been let out about the upcoming smartphone via image renders, support page listings, and numerous certification sites. The phone is expected to launch in two variants which is 4G and 5G, and will be powered by different SoCs.

The Galaxy A52 5G will sport an Infinity-O display with a hole-punch on the top centre of the screen. The device is expected to have a rectangular rear camera module on the top left of the back cover with camera lenses aligned vertically.

The smartphone is expected to sport a 6.5-inch full-HD+ Super AMOLED display with a resolution of 1,080×2,400 pixels. According to a report by SamMobile, the Galaxy A52 4G model will have a high refresh rate of 90Hz, while the 5G model will come with an even higher 120Hz refresh rate display.

The 5G variants will be a dual SIM smartphone and run Android 11. Inline with a report which suggests that the Galaxy A52 5G will get monthly security updates.

The device will be powered by the Qualcomm Snapdragon 750G SoC with 8GB of RAM and 128GB of storage, which can be expandable up to 1TB via a microSD card slot. The device will further, It is said to house an in-display fingerprint sensor.

Furthermore, the smartphone is expected to house a quad-rear camera setup with a 64-megapixel primary sensor, a 12-megapixel secondary sensor, and two 5-megapixel sensors. The front camera could be a 32-megapixels one. In terms of battery,

In terms of battery capacity, the Samsung Galaxy A52 5G is to come with 4,500mAh one with 25W fast charging out-of-the box.

In the connectivity side,  the smartphone 5G variants is expected to be 5G, Wi-FI, Bluetooth, GPS, and a USB Type-C port. Accelerometer, compass, gyro, proximity, and ambient light sensor could be on-board as well.

Other features of the Galaxy A52 5G include IP67 rating for water resistance.

However, Samsung has not made the details of its upcoming A-series smartphone official yet, and also the launch date yet to confirmed but rumours have it with the suppose speculation and launch date for the expected device. Although  rumour has been circulating concerning the the smartphones specifications, features and as well as the price.

The Galaxy A52 series will be available in 4G and 5G variants. Meanwhile, inline with reports, both variants will debut in India some time around mid-March.

The Galaxy A52 4G is expected to be powered by Snapdragon 720G SoC, while the 5G variant could pack the Snapdragon 750G SoC. However,  the specifications of the two variants will be the same,  though we will need to wait for an official launch to be certain.