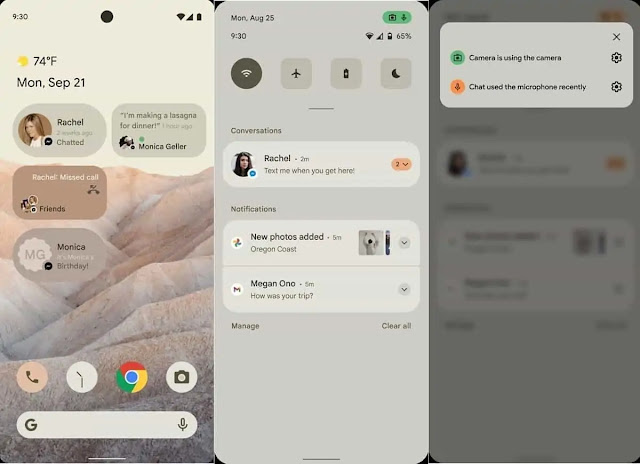 As Android 12 makes way to Android OS, the very first Android 12 Developer Preview of its look has surfaced. Today we will be looking at the basic first preview look and feel of the Android 12 OS as they  show a rather considerable change from the design standpoint, which is not something many of us most have thought of but it obvious  that’s what we’ll be getting.

Furthermore, if you take a slight look at the gallery below the article, you’ll see design concepts from RKBDI, that have been shared by XDA, these came from Google briefings with OEM partners, allegedly.

On the screenshots, you’ll observe that the theme colour is neither black or white, it’s sand-colored. Thus because the UI adapted to the wallpaper, it took its colorway to create a unique theme for itself.

This feature was beforehand rumored to be coming when we wrote that Android 12 will probably get a new theming system that will allow a feature such as this.

Again, You’ll also observe a couple of “Conversation” widgets for recent messages, missed calls, and there about. These come in a 2×1 aspect ratio, or so it seems. There is also some changes to the Pixel Launcher here, it’s now left-aligned, while the weather widget is above the day / date info.

In addition, we will be expecting to see some changes to the Widgets screen. It will no longer be a carousel, but a scrollable list, at least based on the provided information that we can see here.

The notification cards will be different as well- Rounded Notification

The notification Pane is also shown here, and it features a blurred background. The cards that you get for notifications are heavily rounded, which is yet another transition in comparison to Android 11.

Android 12 OS will also show you a preview of when the microphone and camera are active, in a rather obvious way. You’ll notice a green “pill” in the top-right corner, which does shrink to a dot, depending on your location within the UI.

There are quite a few screenshots included in the gallery below, so take a closer look to notice a bevy of changes. Do note that it’s possible there will be some changes before Android 12 drops.

In Line with Google’s intention last year,  the very first Developer Preview will be rolling out before the end of this month.